We were so thrilled when our client, designer/builder Elena deLaunay sent us photos of a kitchen tile installation in a Houston bungalow that we had to learn more about the hows and whys of the project—because it’s simply smashing. With a simple palette and simple materials, she made a small space come to life and showcased Granada Tile‘s sensational cement tiles, in our Cluny pattern, in a ravishing way. It turns out this wasn’t the first time she had used our concrete tiles, which she had first come across in a magazine, in a tile installation. “I used them first in an entryway at a house I was helping decorate—and then in a more extensive installation ,” deLaunay reports. “I chose them because, one, they’re durable, and, two, because of the range of colors and their matte finish. I love how you  can do different patterns within the space. On a porch, I did two ‘area rugs.'” For this project, the cement tiles were originally specified for her own bathroom floor and back splash, but, since this project happened to have priority, “I thought I’d try it in this house first,” she says. “It adds a pretty striking pattern and the large tile keep it from being too busy.”

The space, in what she calls a “nondescript” 1,300-square-foot house, takes its design cues in part from the California-Mediterranean–style entryway. “We redid the interior with that as the theme, stained the floors dark and tiled around the fireplace,” she says. She chose a black-and-white palette throughout and opted for the kitchen’s cement tiles in the same shades. In a clever touch, she used the same cement tile from the back splash on the kick plates below the cabinets, creating a seamless look with the tiles. Now the kitchen is light and bright, due to a new set of French doors on one end and the removal of a wall, and has a hint of dynamic pattern with our cement tiles prominently featured. The result is a knock-out of a kitchen.

5 Ways Cement Tile on Walls Can Transform Your Space 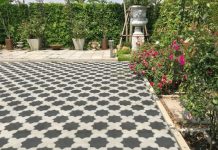